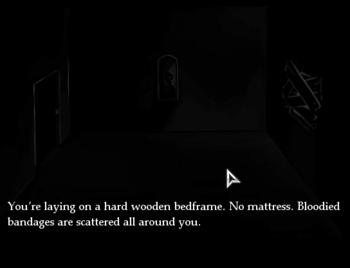 Subject is a 2013 freeware Visual Novel, developed in RPG Maker by Indra and Mariko.
Advertisement:

In it, the protagonist wakes up alone, in a dark room, and covered in bandages. The house they are in seems abandoned, and it's up to them figure out what went on. You can derive additional information about each new room you discover through your senses, with the "Look", "Listen", "Smell" and "Touch" commands. In total, what you do in that seemingly small house will ultimately lead you to one of 8 endings.

. It is short, and all the endings can be found in a couple of hours, so why not give it a try?

NOTE: Due to its brevity, the trope names alone can be spoilers, so it's best to play the game before reading the page.