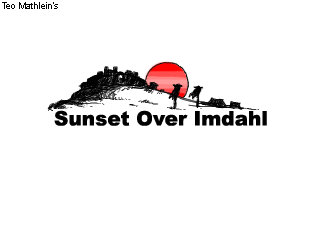 Sunset Over Imdahl is an RPG Maker Game by Theo Mathlein. It was released in both English and a (more or less complete) German translation. The story is about a boy named Lohn who, being the last survivor of The Plague, gets the chance to travel back to the beginning of the year in order to stop it from spreading.
Advertisement:

The English version can be downloaded here