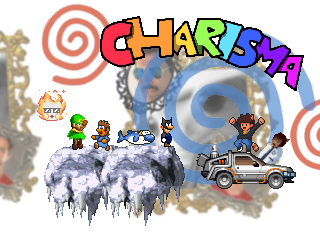 Have Enjoyment!note From left to right: Heavy Fire, Genogenesis7, sspp03 (or just S), Dudim, Miles (Dressed as Batbro), ~CaMtEnDo~ (or, again, just Cam), and Doc.
"It's like a minigame compilation... for fuckfaces!"
— Vitiman, describing his games pretty accurately.
Advertisement:

A series of surreal joke fangames created by Vitiman, originating on the Mario Fangames Galaxy message boards and are rather loosely based upon his rather oddball conversations he has with his friends, all of whom are represented in the games one way or another. The games chronicle Dudim, an incredibly demented Super Mario World dolphin who believes in love, happiness, and most of all, charisma. Joining him are the so-called "Charisma Gang" note Other names include the "Charisma League Of Petco Employees", "Those Charismatic Hooligans", among many other things, a group of equally strange and colourful characters who also believe in the mighty ways of the charisma.

By the tail end of September 2013, a series of incidents around MFGG resulted in Vitiman leaving, leaving the future of the series bleak. However, in late 2014, Vitiman announces that he's working on a seventh entry in the series, this time with an entirely new cast of characters (save for series mainstay Dudim). This entry is considered one of the more out of place ones.

Seemingly out of nowhere on December 14th (near the closing stretch of 2015), Vitiman returned to MFGG. A series of attempts to make a new Charisma happened with it eventually culminating in Charisma 8. This game again, featured a mostly new cast (save some returning faces), but stuck true to its roots in MFGG. This was followed over a year later by the release of "Charisma 3.1 for Workgroups", the series' first significant upgrade in the polish department since 5's release back in 2013. Sporting the same cast as 8, the game appears to conclude with a Cliffhanger and Vitiman said that there were plans to continue onward with a brand new trilogy...

...or at least, that was the initial plan. The main gist of a followup to 3.1 was going to be a more adventurous sequel, detailing the ongoing escapades of a Charisma gang on the run from the police across the country, tentatively titled "Charisma π: Dudim & the Chocolate Factory". The game entered early development before being unceremoniously canned at the tail end of November 2017 for reasons largely unknown.

A proper sequel to 3.1 would never surface - however, a successor to the 2016 "April Frills" Endless Charisma gag came again for 2018's April 1st joke at the expense of the audience, "Charisma: The Last One". In many respects, it's a direct sequel to 3.1, but is a much shorter game with a joke ending per the reason for its existence. For a long time, Vitiman insisted a proper sequel to 3.1 was on the horizon, even confirming one multiple times when Charisma 3.1 wound up winning many awards at the annual MFGG Awards showcase earlier that year.

Unfortunately, due in large part to the increasing "raising the bar" that the series continued to demand in both presentation and writing, alongside the tense interactions of former Charisma members and the current ones, Vitiman quietly announced that the series would likely not get a conclusion. Ironically, this leaves a large portion of the joke in "The Last One"'s name and punchline to now be entirely serious.

A comic starring the Charisma 8 gang was (poorly) made beginning shortly after the release of the eighth game - you can view it here.

Dubbed Dudim in the Family, it starts out as a surreal, heavily poorly drawn MS Paint comic featuring more wacky antics from the new Charisma crew from 8, but then slowly starts to improve on the art (at least, every so slightly) as the plot begins to gravitate towards something more concrete. The comic initially "ended" with a sequel hook, but continues onward somehow, defying all expectations and being drawn by many within the Charisma gang and even outsiders as well.

All 9 installments that exist of the series, including the enhanced remake of the first, can be found here (NOTE: the first 3 are included as a bonus with Charisma 4, so all four first links are to the same page):

This (technical) fanwork provides examples of: