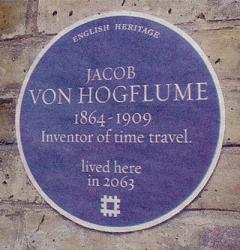 He will have been missed.
"Time travel is theoretically impossible, but I wouldn't want to give it up as a plot gimmick."
— Isaac Asimov
Advertisement:

Time travel is a very versatile plot device. It can range from simply a device for moving The Hero from one Adventure Town to another, to a driver of the plot in itself as the characters try to understand the Nonsensoleum behind it. But broadly speaking, time travel stories can fall into the following categories:

As you can see, these stories depend in part on the many variants of Temporal Mutability. The characters might expect a certain change to be possible when it really isn't, and vice versa — in so doing, they may be Wrong Genre Savvy and think they're in one type of story when they're really in another.

Whichever time travel plot you're working with, there are a few near-universal elements that you find across time travel stories:

"Realistic" is a very weird thing to shoot for in your average time travel story. There's no reason to think that time travel is even possible in real life. Rather than realism, the aim is more for consistency; it's important that the rules of time travel make sense. But this makes time travel stories tricky to write. Too far in the direction of consistency, and you risk hopelessly confusing the audience as they try to wrap their heads around the mess of causality you've made. Too far in the opposite direction, with no consequences for casual time travel, and you risk Opening a Can of Clones—the audience won't take anything that happens in your plot seriously if they think a time-traveller can just change it freely in the future. (Or in the past.)

See also Meanwhile, in the Future… (for how you can run a narrative in two time periods at once) and What Year Is This? (for how your characters can deduce that they've travelled through time).

Examples of Time Travel in Fiction: