To Be Continued... Right Now 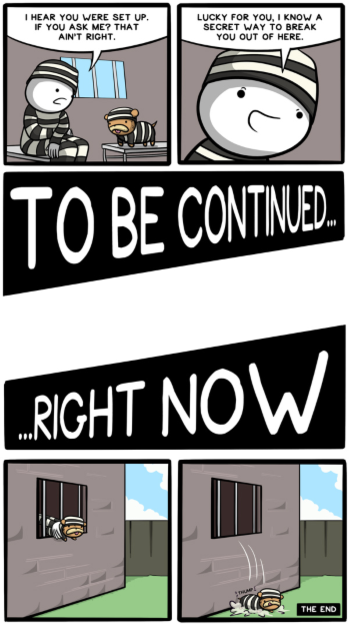 TO BE CONTINUED
Beat
IMMEDIATELY
— The Simpsons Movie
Advertisement:

As Alice and Bob take their Wiki Walk, they find something... new. What could it be?

You'll find that out and more On the Next... I mean, on this very page.

A reveal or plot resolution is set up to be explained in the next episode or following a commercial break, but is then immediately explained. As you probably can guess; this trope is pretty much always Played for Laughs.

This effect can also be caused unintentionally in, for instance, a DVD release of a TV show or made-for-TV movie, or in syndication; where the commercials would go, you instead get a Fade to Black that fades right back in to show the characters in exactly the same positions.

Contrast Cliffhanger, To Be Continued. Compare The Reveal, Find Out Next Time.

Due to the trope's nature: beware of unmarked spoilers in the examples!

Find out!... Three seconds ago.

After Homer goes too far, The Simpsons Movie builds to a cliffhanger... pausing.

After Homer goes too far, The Simpsons Movie builds to a cliffhanger... pausing.