Film / The Guy from Harlem 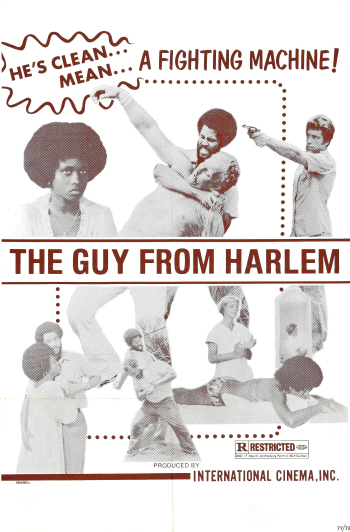 "You got TWO questions, I got ONE answer!"
Advertisement:

Dubbed by Grindhouse Cinema Database as

Blaxploitation's Plan 9 from Outer Space, The Guy from Harlem is an outsider art "masterpiece."

The year is 1976. Al Connors is a streetwise detective from Harlem, currently working in Miami. The CIA hires him to protect an African VIP from potential assassins. He completes the assignment so skilfully that he draws the attention of a gangster named Harry De Bauld. His daughter Wanda has been kidnapped by a rival gangster, and his own gang is too emotionally shaken to attempt a rescue. Al Connors draws on all his Harlem skills to locate Wanda and bring her back alive.

Along the way, he does battle with stilted dialogue, repetitive storytelling, poor production values, choppy editing, goofy fight choreography, incessant flubbed lines, and a pervasive school-play-esque awkwardness that hilariously undermines every attempt at coolness or badassery. But just as Al inevitably triumphs, so the film's many limitations freebase into a glittering crystal of So Bad, It's Good.

The Tropes from Harlem: