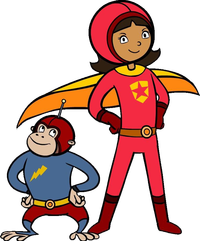 WordGirl and her sidekick, Captain Huggyface
"From the planet Lexicon; watch out, villains, HERE SHE COMES!"
WordGirl is an animated television show on PBS. The titular character is a superheroine who fights crime with her powers of literacy as well as her powers as a Flying Brick. The show is an Affectionate Parody of the superhero genre and uses writers from sketch comedy shows like Saturday Night Live, plus actors known for ad-libbing ability, in hopes of making a show as entertaining for adults as it is educational for kids.
Advertisement:

WordGirl uses her great vocabulary to fend off villains such as The Butcher, Dr. Two-Brains, Granny May, Tobey, and Chuck The Evil Sandwich-Making Guy. She never reveals her alter-ego to anyone, including her own family. She and Huggy use their crashed spaceship as a secret hideout.

The series ended with the two-part episode "Rhyme and Reason", which was released online on August 7, 2015. A comic book adaptation was published by KaBOOM! Comics.

See also the character sheet and the episode recaps.

InvisiBill--who has the power to turn invisible--is surprisingly loud and energetic, rather than the stealthy and reserved nature that might be expected.

InvisiBill--who has the power to turn invisible--is surprisingly loud and energetic, rather than the stealthy and reserved nature that might be expected.