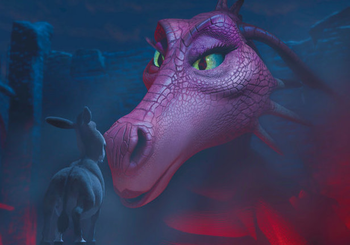 Ahh! A monster! A squicky mess of tentacles and seventeen eyes, a-and hideous teeth a-and his breath smells like sulfur and he opens his mouth! He's about to speak! He says: "I'm a she."

You see, in the mind of the audience (or at least in the mind of some characters) monsters are often initially assumed to be male. This trope covers situations when these characters are surprised to find out that the monster is, in fact, a female.

This takes the form of a monster in some way having her gender revealed, and someone acting surprised by this.

Contrast (or compare?) Viewer Gender Confusion, when it's the viewers who are surprised. See also Samus Is a Girl, Monster Is a Mommy and Your Tomcat Is Pregnant.

Jessie's Yanmega is revealed to be female, much to the shock of her trainer.

Jessie's Yanmega is revealed to be female, much to the shock of her trainer.