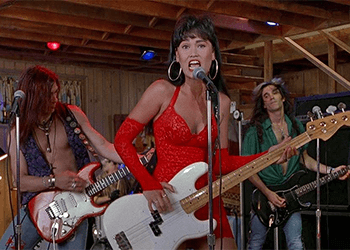 "Our songs are unique, but let's face it: without a mysterious-looking girl in our rhythm section, we have zero hope of any real exposure."
— The Hard Times, "All-Male Band Just Waiting to Meet the Right Girl Bassist"
Advertisement:

In the popular imagination, the bass guitar is the feminine rock band instrument. Odds are, if there's an "alternative", rocker chick character, she'll play the bass. And since rock bands can have at most one female member, she'll be the bassist.

This goes hand in hand with other musician stereotypes. Since drummers stereotypically require strength and physicality and the lead guitarist gets all the girls, men gravitate to those roles, leaving the less-competitive bass player positions open for women to gain a foothold. It also often goes along with Nobody Loves the Bassist: the position is typically seen as the "least essential" member of a band, so being a girl is often seen as the female bassist's main contribution. Compounding this with the phallic imagery associated with guitars — including bass guitars — her job is to add sex appeal or otherwise pander to the audience.

There are, however, other reasons the bass can be seen as the feminine instrument. As the rhythm and core of the sound, the bass can be considered The Heart among the instruments, lending itself to female musicians who might be more willing to play a support role.

This stereotype can be considered tokenizing, with the implication that female bassists aren't "real musicians". However, some of the most famous real-life examples, like Suzi Quatro, Tina Weymouth, or Kim Gordon, were Lead Bassists and defined their bands' sounds. More broadly, female bassists can be seen as trailblazers in the male-dominated rock genre and inspiration to generations of female musicians.

Compare Male Band, Female Singer and Five-Man Band, which put the Token Girl in a different role. Remember that Aversions are not notable and Real Life examples cannot be Played With.