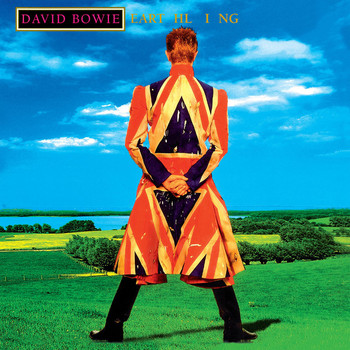 "God is an American."
Advertisement:

Earthling is the twenty-first studio album by David Bowie, released in 1997. It is also his first self-produced album since 1974's Diamond Dogs.

Although Bowie's plan to record a series of sequels to 1. Outside fell through the cracks, that didn't mean the English rock chameleon was down for the count. Rather, he took the style he had built up on that album and reconfigured it for the second half of The '90s. Born from the vestiges of an aborted project to modernize and re-record a number of his old hits with a few new pieces thrown innote the re-recordings originally planned for this album would remain unreleased until the Is It Any Wonder? digital EP in 2020, Earthling continues the industrial influences (in particular Nine Inch Nails) from its predecessor but orients them in a more commercially accessible, danceable direction (though not without its own share of ambient leanings here and there), essentially being "David Bowie meets Drum and Bass".

Nine Inch Nails' then-only member, Trent Reznor himself, would later remix the last of Earthling's singles, "I'm Afraid of Americans", and star in its music video, which became Bowie's first in over a decade to see heavy rotation on MTV. The four singles prior to it were "Telling Lies", "Little Wonder", "Dead Man Walking" and "Seven Years In Tibet".

"Telling Lies" was notably the first work by a major popular music artist to be released over the internet, being officially available for download in three different versions, released on September 11, September 18, and September 25, 1996. The campaign was launched by a promotional activity on an online chat in which he and two impersonators tasked fans with identifying the real deal through an inversion of Two Truths and a Lie, in which the real Bowie would tell factoids about himself and the impersonators would tell equally-convincing fibs before asking the chat to vote on which Bowie they thought was the real one. The real Bowie came in third. The three versions wouldn't be available physically until the CD single and 12" single releases on November 4, both of which would offer the full lot of them on one package; until then, the digital versions were collectively downloaded by over 300,000 people, which in 1996 was beyond impressive.