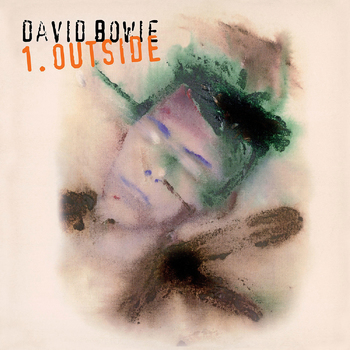 "This chaos is killing me."
"There is only 1. David Bowie... or is there?"
"The mystery continues..."
—Taglines from the album's advertising campaign.
Advertisement:

Outside (also known as 1. Outside) is the twentieth studio album by David Bowie, released in 1995. This album also sees Bowie reunite with Brian Eno for the first time since Lodger in 1979, and unlike the Berlin Trilogy, on which he served as a collaborator rather than a producer (as is commonly mis-believed), Eno actually did take over production duties this time around, marking the first and last time he ever outright produced a Bowie album. The album marks yet another shift in sound and style for Bowie, this time switching over to a blend of industrial rock and art rock influenced heavily by Nine Inch Nails (to the extent where he toured with NIN and became personally acquainted with Trent Reznor while supporting the album).

The album also marks cautious reconciliations with RCA Records and EMI for Bowie, who had left the former in 1982 after souring relations over the course of the late '70s and the latter in 1990 over their hesitation towards his stint in Tin Machine. RCA would become Bowie's UK distributor as part of a deal with BMG throughout the '90s, also distributing Bowie's 2010s albums The Next Day and ★ in the territory (though he would remain properly signed onto various other labels). Meanwhile, after his previous US distributor, Savage Records, went belly-up while promoting Black Tie White Noise, Bowie signed onto EMI subsidiary Virgin Records for US distribution of Outside (while its immediate predecessor, The Buddha of Suburbia, was also released on Virgin in the US, that didn't come out in the States until one month after this album). Similarly to RCA, Bowie would stick with Virgin as his US distributor throughout the rest of the decade, permitting them and EMI to also handle the 1999 remastering campaign of his 1969-1989 back-catalog in all regions, eventually leaving the EMI group a second time in 2001 following the shelving of Toy.

Set 20 Minutes into the Future in 1999, a new art craze is sweeping the world: the murdering and mutilation of human bodies. Known as "Art Crime", Detective Professor Nathan Adler has been tasked by the government to investigate the phenomenon and determine which actions within the movement are truly art and which are just glorified murder. When a 14-year old girl in Oxford Town, New Jersey, named Baby Grace is found murdered in too gratuitous of a way to count as art, Alder is sent to find and arrest the culprit— which causes waves of conflict when everyman Leon Blank is accused and incarcerated, despite Blank's claims that he had never even set foot in the town where the murder took place. Thus, the album explores these events and their fallout in a (possibly) nonlinear fashion influenced by Twin Peaks, focusing not only on the storyline but also providing in-depth character studies— from Nathan to the names on the suspects list to even the anonymous murderer and their victim— and a thorough examination of what truly counts as art in a world where the meaning of the word "art" itself is coming under question more than ever before.

The album spawned three singles: "The Hearts Filthy Lesson", "Strangers When We Meet" (itself a re-recording of a track from The Buddha of Suburbia), and "Hallo Spaceboy", the latter of which was remixed by the Pet Shop Boys and incorporated into the Major Tom saga. The album was also a commercial success, peaking at No. 8 on the UK Albums chart and No. 21 on the Billboard 200, and was certified silver by the BPI.

Bowie planned for the album to be the first of a trio of concept albums (the second would have been called 2. Contamination), but Bowie ultimately scrapped the other two records and left the story unfinished. However, the themes of the album would continue to be explored on its follow-ups, Earthling and 'hours...', with a lingering influence that stretches all the way to ★.

*Absent from Excerpts from Outside

"Paddy? What a fantastic tropes page. Tell the others!"