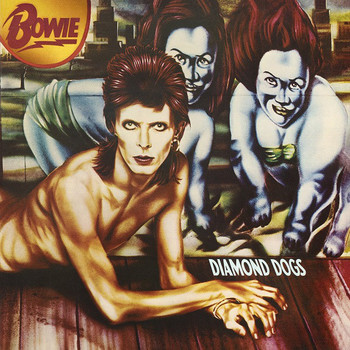 "This ain't rock 'n' roll: This is genocide!"
"And in the death, as the last few corpses lay
Rotting on the slimy thoroughfare
The shutters lifted in inches
In temperance building high on poacher's hill
And red mutant eyes gaze down on hunger city
No more big wheels

Fleas the size of rats sucked on rats the size of cats
And ten thousand peoploids split into small tribes
Coveting the highest of the sterile skyscrapers
Like packs of dogs assaulting the glass fronts of love-me avenue
Ripping and re-wrapping mink and shiny silver fox, now leg-warmers
Family badge of sapphire and cracked emerald, any day now
The year of the diamond dogs"
— "Future Legend"
Advertisement:

Diamond Dogs is the eighth studio album by David Bowie, released in 1974. The last album of his that can be classified as Glam Rock and a Concept Album born from the ashes of a proposed musical adaptation of 1984 (Bowie could not get the rights to the novel), it is set in a post-apocalyptic environment called "Hunger City", where the remnants of humanity scrounge their way into as much decadence that can be enjoyed in the dying days of mankind. Keeping in line with its starting point, the album makes frequent references to George Orwell's novel, orienting its themes and plot points around Apunkalypse settings and characters. Fitting this darker direction, the album reunited Bowie with collaborator Tony Visconti, who he had last worked with on the similarly gothic The Man Who Sold the World four years prior; Visconti provided string arrangements and mixing work here. Barring the Harry Maslin-produced Station to Station, Bowie and Visconti would continue to collaborate until 1982, when they fell out again over Bowie's decision to have Let's Dance produced by Nile Rodgers without informing Visconti.

Sound-wise, the album continues the theatrical glam rock style of Bowie's prior records, but incorporates a greater amount of funk and Rhythm and Blues elements, influenced by a longtime affinity for black musical styles that extended to Bowie's childhood. As such, this album was the prelude to Bowie's abandonment of glam rock and the beginning of his "plastic soul" period, which would galvanize on his next two albums and have a lasting impact on the remainder of his career. Though that's not to say Bowie completely left his bombastic and theatrical glam era to rot in the gutter; he would still maintain an air of theatricality in live performances, and would use the Diamond Dogs tour as the basis for his similarly elaborate Glass Spider tour in 1987.

The album cover was created by Belgian artist Guy Peellaert, who also did the album art for The Rolling Stones' It's Only Rock 'N' Roll the same year and would later design the film poster for Taxi Driver.

Diamond Dogs topped the charts in the UK and Canada and peaked at No. 5 on the Billboard 200, going on to become the sixth best-selling album of 1974 in the UK and being certified gold in the UK, the US, France, and Sweden. The album's performance in America was particularly notable given the more modest sales of its predecessors, and would pave the way for Bowie's American breakthrough with Young Americans the following year.

The album was supported by three singles: "Rebel Rebel", the Title Track, and "1984" (the latter exclusive to the US and Japan).

They call them the Diamond Tropes: