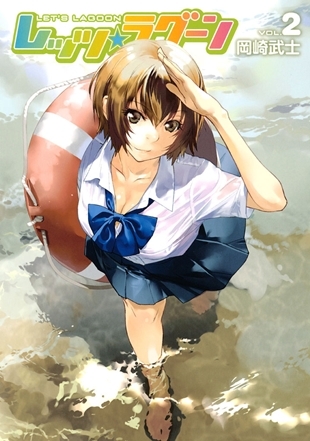 As the ferry of his school's field trip collides with something underwater in a dense fog, Yamada is thrown overboard and loses consciousness. Some time later, he awakes to find himself on a kilometer-wide uninhabited island. As days pass without sign of rescue, Yamada takes matters into his own hands and sets about creating a boat as his rations steadily decrease... when he unexpectedly finds a girl from his class, Imaise Chika, swiping some. For the next few days they cooperate in their efforts to survive and escape, until something very unexpected happens.

Later, they are joined by Shibata, an apathetic teacher at their school; Nori, a classmate highly infatuated with Yamada; and Imaise Miki, Chika's older sister and Nori's senpai in the school's Track & Field Club.

Written and drawn by Okazaki Takeshi, Let's Lagoon at first glance appears to be an arbitrarily set up island survival/drama manga. A few chapters in, however, things take a highly interesting turn.