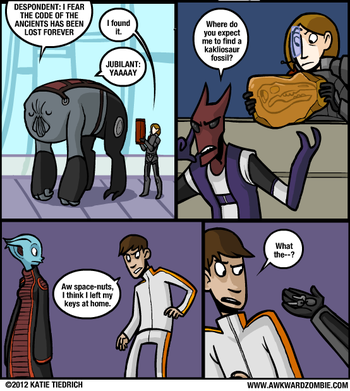 "Did you break into my house!?"
"Some doctors have the Messiah Complex — they need to save the world."
— Dr. James Wilson, House

Chronic Hero Syndrome is an "affliction" of cleaner heroes where for them, every wrong within earshot must be righted, and everyone in need must be helped, preferably by Our Hero themself.

While certainly admirable, this may have a few negative side-effects on the hero and those around them. Such heroes could wear themselves out in their attempts to help everyone or become distraught and blame themselves for the one time that they're unable to save the day. Spending so much time and effort saving everyone else can also put a strain on the hero's personal or dating life. A particularly bad case of this may develop into a full-blown Martyr Without a Cause. Maybe they simply like being in the line of danger.

If they aren't smart about their heroism, and they have a tendency to intervene without getting the whole picture, then they're liable to just make things worse. Their predictable heroism also makes them particularly prone to manipulation by certain devious villains. Interestingly enough, as Don Quixote lampshades, this syndrome was noticed by Chivalric Romance writers and they devised a temporary cure: The Damsel Errant must simply ask the hero not to engage in any other adventure until he has finished hers.

This is extremely common in video games as a way to make the player deal with plot threads like Fetch Quests when they should have more important things on their minds. The characters are just too darn heroic to leave people to suffer, so time to go wander around in caves for a while. No matter their personal situation, they're always willing to stop and help.

Small Steps Heroes tend to suffer from this. A related disorder is Samaritan Syndrome, where the hero bemoans that their duties leave them no free time for their personal affairs.

The exact opposites of this are Bystander Syndrome and True Neutral. Also contrast with Chronic Villainy and Changing of the Guard. If they get paid for this kind of work, it's We Help the Helpless. When it's because the victim is female, the diagnosis is The Dulcinea Effect. Someone with Chronic Hero Syndrome who travels from place to place is a Knight Errant. This type of hero never fails the "Leave Your Quest" Test. An inactive one will Jump at the Call.

For when the hero is this way mostly to people close to them, see A Friend in Need.

Contrast the decidedly unheroic Heroism Addict, who is the cause of the problems they solve, and only cares about appearing heroic. In real life, the term Hero Syndrome is also used for this kind of people.