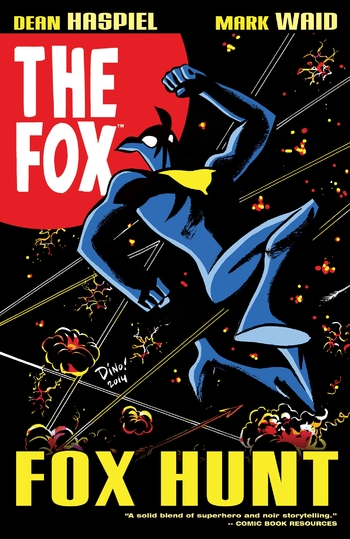 A mini-series featuring the most recent reboot/reimagining of the hero known as "The Fox", one of many old Archie Comics characters that were created back when the company decided to dabble in superheroes who has since gone through more than one incarnation over the years. This iteration was brought to light and published by Dark Circle Comics (an imprint of Archie, formerly know as Red Circle) along with a few others.

This fifth incarnation of The Fox takes most, but not all, of its premises from a single past incarnation. Self-known as "The Freak Magnet", Paul Patton Jr. was once a mere photojournalist who, in a moment of daring, decided to take up his father's identity as "The Fox" and become a crimefighter to have a better means of getting stories. He couldn't find "the scoops" on his own, so he became The Fox to draw said scoops to him. Problem was that, before long, it worked too well, to the point where he couldn't get the "stories" and "scoops" and overall weirdness and danger to leave him alone.

Then he started a family of his own.

This particular story begins with Paul, along with his teenage son Shinji, visiting and taking pictures of a small and now abandoned town known as Beaver Kill on Paul's editor's orders. Paul can't help but reminisce about the town he grew up in, the same one that's about to be turned into a dam/reservoir for Impact City, albeit a much needed one, courtesy of Bright Industries.

Said stroll down memory lane doesn't last, however, before events lead him to swear to his wife, and less convincingly so, to himself, to give up being The Fox for good, a vow that, of course, doesn't last halfway through the second issue. On the other hand, Shinji, who openly knows his father's secret, has his admiration of his father's superheroic altruism turn into his own enlightenment as he decides to be like him and takes up the new identity of "The Ghost Fox", complete with a snow-white version of his dad's costume. And what bad timing to be any sort of Fox, as the CEO of the aforementioned Bright Industries, a benevolent man by day and a notorious crime boss by night named Mr. Smile, calls together the most dangerous of criminals and villains and promises a million dollars to the man or woman that can bring him The Fox's head. The Fox Hunt is on.

Tropes that this mini-series includes are: