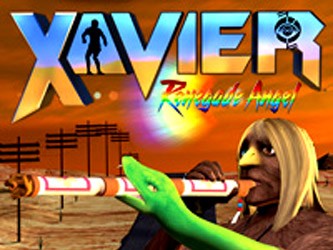 "I'm a survivor. We're a dying breed."
"Unload your troubles unto me, even if it's tough to swallow. I'm used to swallowing huge loads."
"I'm going to help you, even if it kills us both!"
Advertisement:

Created by PFFR—the minds behind Wonder Showzen—for Adult Swim, Xavier: Renegade Angel is, on the surface, about an angel who has defected from Heaven. Good luck finding out what it is really about, though. The eponymous Xavier is either an actual fallen angel or just a cosmic abomination that was abandoned by his mother. Forced to Walk the Earth because everyone hates him, Xavier seeks enlightenment and tries to help people—but at worst, he invents problems where none exist and causes tons of carnage, and at best, he somehow gets everyone to put aside their differences and join together for the common (and usually justified) goal of beating him senseless.

Probably the weirdest show [adult swim] has ever produced (and that is saying a lot), Xavier was largely one huge Mind Screw, with the title character speaking in a near-continuous, stream-of-consciousness...well, stream of dialogue ranging from narrative and conversation to puns and portmanteaus to "unintentional" double-entendres and callbacks. The show's only real coherent narrative revolves around a subplot involving Xavier's incredibly screwed-up childhood and the death of his adoptive parents.

Xavier is uniquely abstract, showing concepts in a way that—instead of using thematic devices such as plot—creates connections in various patterns to prove a point. A good example is the episode "Signs From Godrilla": This episode explores the aspects of choice, free will and religion by using various themes, including recursion and mind/body dualism, to aid in its expression.

The show was animated in 3D with (some) motion-capture all done in CGI, which allowed for a vast range of strangeness; it is all pretty damn trippy, to say the least. If you were to combine in equal parts Wonder Showzen, the works of Carlos Castaneda and Alejandro Jodorowsky, Kung Fu (1972), Walker, Texas Ranger and the graphics and tone of Postal 2 you would get something similar to Xavier. Do not take this as license to Watch It Stoned—it might make more sense, but it is just as likely that you will be utterly terrified from the sensory overload.

More than ten years after the show ended, Xavier made an official reappearance as part of Adult Swim's Class of 2020 Commencement Speaker series - watch it here

A note on It Makes Sense in Context and Makes Just as Much Sense in Context: To save time, we will only clarify which one something is on the rare occasion where it does make sense in context.