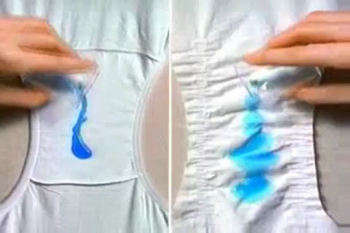 The ads on TV are really helpful, because they use that blue liquid. And I'm like, "Oh! That's what's supposed to happen."
When I see that single blue drop in the middle of the pad, I'm thinking, "That's exactly how my period works."
— Maxi Pad commercial lampshading this trope
Advertisement:

In commercials featuring absorbency tests, particularly menstrual products and diapers, the liquid being absorbed will be bright blue. This is a deliberate attempt to avoid unsavory resemblance to any kind of bodily fluids, even though that is the product's intended use. Think about it — red/pink/purple, yellow/orange, or brown? Pretty obvious. Green or black would most likely put you in mind of the same kinds of fluids, except with something gone horribly wrong. Clear wouldn't easily show up on comparison shots, or might squick out viewers for other reasons. Meanwhile, the only fluid you're going to associate with blue is good old pure, healthy water.

Humorously, a blue liquid test will nearly always have a small disclaimer on-screen, reminding us that this is a "dramatization". Just so the audience didn't think that somebody somewhere actually has blue periods.

Blue liquid was first used in place of the others probably for the simple desire to not Squick out viewers, especially those who might be eating at the time. This, before the Internet age, placed some of these products in the "Yes But What Does It DO?" class for viewers under a certain age. Seriously, how does one tell a Poise pad from an Always pad if you don't know the liquid color?

Pretty much any ad for menstrual products and diapers uses this trope, all around the world. In the case of menstrual products, advertising them at all was banned until the 1980s, and then it was only allowed if any blood shown was not red or other realistic color. Compare No Periods, Period.

See also Water Is Blue. Nothing to do with Blue Blood; either the metaphorical aristocratic kind, the TV show named after a slightly-different metaphorical kind, or Alien Blood that's literally blue. Compare Rainbow Puke for a similar kind of color substitution to avoid squicking out the audience.