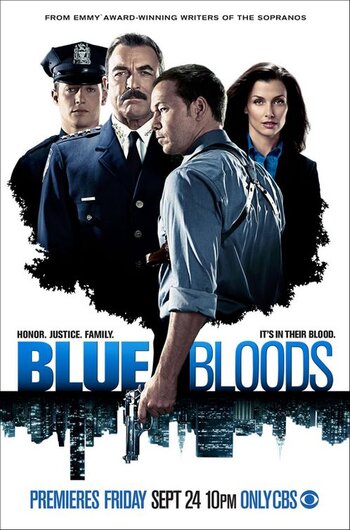 A tree grows in Brooklyn. note From left to right: Officer / Sergeant Jamie Reagan, Commissioner Frank Reagan, Detective First Grade Danny Reagan and Assistant District Attorney Erin Reagan.
Think every family in the Crime And Punishment genre is on the bad guys side? What if we reversed the equation? The Reagan family is a law enforcement family, not a robber family. A four-generational family within the New York City Police Department, with a retired Police Commissioner from Ye Goode Olde Days as the great-grandpa, current Police Commissioner Frank Reagan as The Patriarch, his sons who are all cops and his daughter who is a DA. And their children (two of which have declared they are seriously considering joining the NYPD). They spend Sunday dinners together, quarrel, but stick by each other. Because the family that arrests together stays together.
Advertisement:

They have different personalities. Grandpa Henry (Len Cariou) is a hardbitten Da Chief from the old days; Frank (Tom Selleck) is an incorruptible patriarch and responsible police commissioner, who knows how to keep peace between his children and how to encourage them without giving undue favoritism; Danny (Donnie Wahlberg) is a ruthless but competent homicide/major case detective who always catches the bad guys; Erin (Bridget Moynahan) is a stickler for points of law but she can also manipulate the law to her advantage when seeking a conviction; and Jamie (Will Estes) is an idealist beat cop who feels a call to serve and protect. They are all loyal to each other and they all serve the cause of keeping order in New York City.

Blue Bloods is a CBS Cop Show with Family Drama elements that began airing in the Fall 2010 season. Its episodes typically interweave about three plot threads focusing on different parts of the family. The A-plot is almost always Danny and his current partner in a fairly standard Police Procedural Case of the Week, but the other threads vary widely by episode, from family drama around Erin's and Danny's children to Frank wrestling between his duties as police commissioner and his desire to do right by his family and city, to Jamie's growth and maturation from rookie academy graduate to experienced patrol officer, and eventually training officer in turn to a rookie.

Not to be confused with the aristocracy, whose article is named Blue Blood.

As of April 2022, this show has run for 12 years and has been renewed for a thirteenth season.

open/close all folders
Tropes # to D
Tropes E to I
Advertisement:
Tropes J to O
Tropes P to T
Tropes U to Z