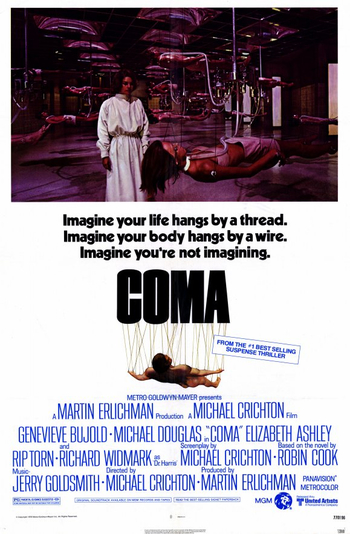 A 1976 medical Conspiracy Thriller novel by Robin Cook. In the novel, Susan Wheeler is a medical student working at the Boston Memorial Hospital. Young, healthy patients are coming in for routine operations and leaving in permanent comas. Susan investigates, eventually unearthing an Organ Theft conspiracy.

The Film of the Book was released in 1978, written and directed by Michael Crichton. It stars Geneviève Bujold as Susan (who's changed from a medical student to a full M.D.) and Michael Douglas as her doctor boyfriend Mark, along with Elizabeth Ashley, Rip Torn, and Richard Widmark. Ed Harris and Tom Selleck have early roles as a resident and a patient, respectively. The film also features a score by Jerry Goldsmith.

A Mini Series version by Ridley Scott and Tony Scott aired on A&E in 2012. Susan, once again portrayed as a medical student, is played by Lauren Ambrose while Steven Pasquale plays Mark. Also, the Boston Memorial Hospital is changed to the Peachtree Memorial Hospital, accommodating a change in setting from Boston to Atlanta.

Not to be confused with the Iranian film Komaa.