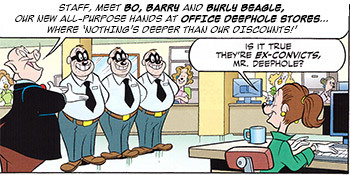 Of course, seeing how the three of them are proud Card Carrying Villains, don't expect this to last. (They are even still wearing their Domino Masks, for Pete's sake!)
"The game ain't in me no more. NONE of it."
— Dennis "Cutty" Wise, The Wire
Advertisement:

Once upon a time that guy lived on the wrong side of the law. Whether a thief, a highway robber, or other outlaw, he had a Heel–Face Turn and through various circumstances, decided to reform his ways. Or perhaps he was a Justified Criminal and didn't even need to have a Heel–Face Turn, only a chance to be accepted. Now he puts his experience as a former criminal to the service of the law.

Compare Recruiting the Criminal, when the character works for the law while still remaining a criminal, and Boxed Crook, when he's coerced or blackmailed into cooperating with the law. It may even become The Atoner in some cases. Compare and contrast Retired Outlaw, who may never have reformed and may have simply stopped. Falsely Reformed Villain is a subversion, when they pretend to reform but are just using it as a ruse to commit more crimes. If the reformation is on a societal level, then it is a Heel–Face Town.