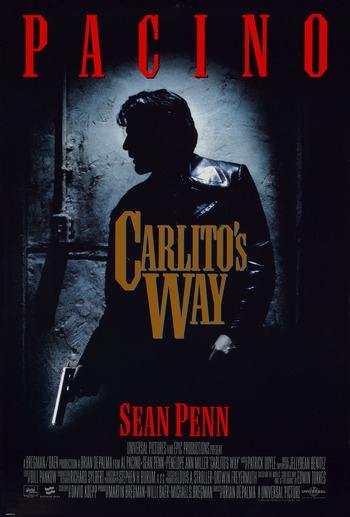 Carlito's Way is a 1993 Brian De Palma film in which Al Pacino plays a Puerto Rican gangster hoping to reconcile and start a new life after his five-year stint in jail. It's a far cry from being another Scarface, though Carlito's Way may be seen as its spiritual successor. Indeed, the two films are nearly inversions of each other; whereas Tony Montana rises from a nobody to a prominent drug lord, Carlito Brigante attempts to reform after a life of notoriety. Both films however, go their way to show that gangster life is not all it's cracked up to be.

In 1975, Carlito Brigante is released from prison with help from his lawyer and friend David Kleinfeld (Sean Penn), after discovering that the prosecutor's evidence has been gathered through questionable means. From this second chance at life, Carlito decides to reform himself for good, vowing to stay legitimate and out of crime's way. He manages to buy a stake in a successful nightclub and rekindle his relationship with Gail (Penelope Ann Miller), a beautiful dancer.

Unfortunately, Carlito's criminal past catches up with him - his former associates, along with an up and coming gangster Benny Blanco from the Bronx, attempt to cajole him back into the gangster life. Further complicating things, the FBI wishes to see Carlito put back in jail. But the biggest obstacle is Kleinfeld's dilemma with a mafioso boss Anthony 'Tony' Taglialucci, who is locked up inside Rikers Island; Tony T. wants Kleinfeld to spring him out, and Kleinfeld isn't sure of what other plans Tony T. has in mind for him afterwards..

The film was an adaptation of two novels by Edwin Torres: Carlito's Way (1975) and its sequel After Hours (1979). It left out several events of the first novel. Said events were eventually filmed for a prequel. Carlito's Way: Rise To Power was released straight to video in 2005. It covers the criminal activities of Carlito in the 1960s. The prequel was directed by Michael Bregman. The titular character was played by Jay Hernandez. The film remains relatively obscure, failing to gain much attention.