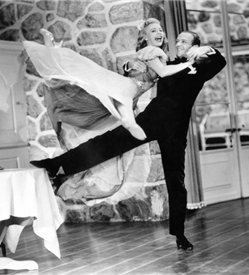 Amanda is definitely sure she's in love with Tony after this.
Won't you change partners? And then
You may never want to change partners again.
— "Change Partners" (song from Carefree) by Irving Berlin
Advertisement:

After Amanda Cooper (Rogers) breaks off her engagement to Stephen Arden (Bellamy) for the third time, he asks psychiatrist Tony Flagg (Astaire) to analyze her. Tony meets with Amanda several times, but something goes wrong with each appointment, and he makes no progress in finding the root of her Commitment Issues. Meanwhile, Amanda falls in love with Tony. When she tries to tell Stephen about it, he misunderstands and thinks she is finally ready to marry him. He excitedly announces their upcoming wedding just before Amanda confesses to Tony that she's fallen for him.

Convinced that she is merely confusing respect for a doctor with love, Tony hypnotizes Amanda into believing that she hates him and loves Stephen. Midway through the session, he realizes that he's making a mistake—not only does she truly love him, but he loves her too. However, before he can undo the suggestion, Amanda escapes from his office. Stephen is delighted with her newfound devotion to him even after he finds out the reason for it, and he convinces a judge to issue a restraining order preventing Tony from seeing Amanda. Tony must race against time to reverse Amanda's hypnosis-induced change of heart before she marries Stephen.

No connection to the webcomic of the same title.