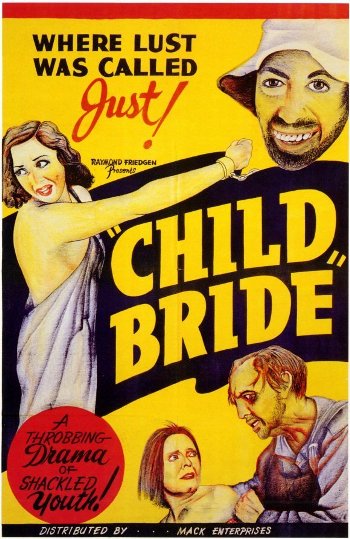 Preacher: If there is anyone here among you, who knows of any reason why these two people should not be joined together in holy wedlock, let him speak now.
The Cinema Snob: SHE'S TWELVE!
Advertisement:

Child Bride, also known as Child Brides, Child Bride of the Ozarks, and Dust to Dust, is a 1938 American film directed by Harry Revier and produced by Raymond L. Friedgen. The film was promoted as educational and as an attempt to draw attention to the lack of laws banning child marriage in many states.

Or at least, that's what the opening text claims to be doing.

Set deep in the Ozark Mountains, the plot revolves around Miss Carol (Diana Durrell), an idealistic teacher in a remote one-room schoolhouse. A repatriated native of the Ozarks herself, she is determined to stop the practice of child marriage, in which older men marry teen or preteen girls. Her campaign raises the ire of some local men, led by Jake Bolby (Warner Richmond), who drag her into the woods one night, and tie her to a tree planning to tar and feather her back. Before they can do this, however, Angelo the dwarf (Angelo Rossitto) and Mr. Colton (George Humphreys) arrive with a shotgun to save the day.

Following this, Jake Bolby comes across young Jennie Colton (Shirley Mills) skinny-dipping while her friend Freddie Nulty (Bob Bollinger) keeps watch, and develops an unwholesome interest in her. Later that afternoon, when her father starts abusing his wife in a drunken rage, Jennie's mother injures him with a knife. Bolby, seeing an opportunity for revenge, sneaks in and finishes him off. Then he helps Jennie's mother hide the body by chucking it over a cliff, and blackmails her into letting him marry her little daughter, threatening that otherwise he will see her hanged for murder.

After a revolting scene in which he "courts" Jennie by giving her a doll, the two are married. It later turns out that this ceremony was illegal, as child marriage had been banned several days prior, but this point quickly becomes moot. Before Bolby can consummate the union, he is gunned down. Jennie then leaves his house with Freddie.

This film is infamous for the topless and 5 minute nude scene with Jennie (who is eleven years old in the film, played by the twelve-year-old Shirley Mills). Some "soft reel" prints and screenings of the film have simply cut out the topless scene, leaving only the skinny-dipping sequence which was shot at more of a distance with the distortions of the water and the family dog's joining her for the swim helping conceal most of the potentially prurient parts. (Also, since Shirley Mills didn't know how to swim very well, most of the distant shots were actually of stand-in Bernice Stobaugh, a local girl.) Mike Nelson and Kevin Murphy also screened this movie for Mystery Science Theater 3000, but the crew found it too awful and disturbing to feature on their show, with Murphy saying that he had "a good cry, a little liquor, and a shower" after watching it. Frank Conniff called it the absolute worst film he had seen as a potential selection for the show. Considering it was his job to screen films for the show, that's a lot of competition.

This page is about the censored versions only.