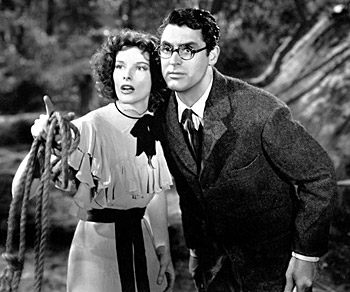 "There is a leopard on your roof and it's my leopard and I have to get it and to get it I have to sing."
— Susan Vance
Advertisement:

Bringing Up Baby is a classic 1938 Screwball Comedy directed by Howard Hawks, and starring Katharine Hepburn, Cary Grant, and a leopard. It was inspired by a short story by Hagar Wilde.

Milquetoast paleontologist David Huxley (Grant) is about to be married and is only missing one piece of his Brontosaurus skeleton (the "intercostal clavicle"). The night before his wedding, he's supposed to butter up a rich widow's lawyer so she'll donate a million dollars to the museum. Things take a rapid turn for the worse, though, when he meets scatterbrained heiress Susan Vance (Hepburn), who accidentally steals his golf ball, and then his car, preventing him from finishing the meeting. After the evening ends with Susan braining the lawyer with a rock, David vows that he never wants to see her again.

The next morning, Susan calls David on the telephone. Her brother in South America has mailed her a tame leopard called Baby, and she enlists David to help her transport it to her aunt's farm. Then, having made up her mind that David is the man she's going to marry — though he doesn't know it yet — she does whatever comes to mind to keep him there. It turns out that Susan's aunt is the potential museum donor, so they have to conceal David's identity and the presence of Baby, while also hunting for the intercostal clavicle, snatched up and buried by the dog.

Then Baby escapes, and so does a man-eating leopard from the circus, leading to several cases of mistaken identity as multiple groups of people go leopard-hunting in the forests of Connecticut. Everyone ends up in jail (briefly), David's fiancee rejects him, and the dinosaur skeleton is destroyed, but David confesses his love for Susan at last, and the movie ends with their happy, if still scatterbrained, embrace.