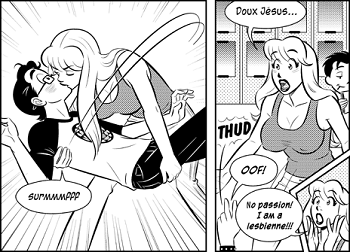 That seems a bit like jumping to conclusions.
Danny: Does he make you laugh?
Tess: He doesn't make me cry.
— Ocean's Eleven
Advertisement:

Alice and Bob are friends, or Bob has a crush on Alice. They go on a date and kiss, and Alice finds that she does not feel anything for Bob, as much as she tries. He is a great guy, but that special something is just not there.

This tends to come up with Test Kiss but can happen in any situation where two people try out a relationship but find they have no chemistry. This is often the fate of the Dogged Nice Guy, and always the fate of the Unlucky Childhood Friend and the Romantic Runner-Up. It will also happen if they are Better as Friends or Platonic Life-Partners.

A more explicit version of this trope is when someone is unhappy in a current relationship, and we see them having unfulfilling sex or no sex. Kisses with the soon-to-be-dumped significant other are perfunctory and short.

It is only No Sparks if the character in question has never felt a true spark towards his or her attempted significant other. If there used to be chemistry but it's gone, that's Dead Sparks.

This trope sometimes occurs in Romantic Comedy during the sad period when the hero and heroine are estranged. One or both of them may try to date someone else, but it does not work because there are No Sparks. This is taken as an indication that the lost guy or girl is The One and should be won back at any cost.

Sometimes No Sparks happens when the wrong guy comes first. The lack of sparks discredits the bad relationship, often retrospectively.

This can be a method of Cleaning Up Romantic Loose Ends. Or creating them.