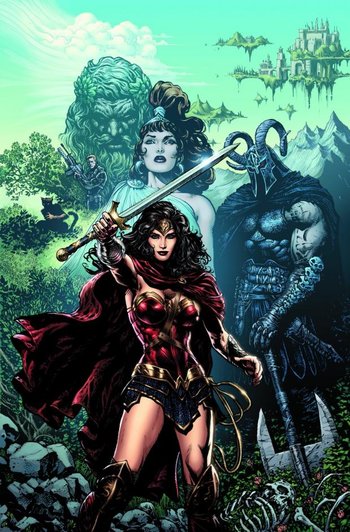 Diana, Hippolyta, and Ares.
What am I?
You are many to many. Peace-maker and war-fighter. Supplicant, aspirant, penitent. The true friend and the boon companion, the trusted soul and the truth-speaker...
...And you have been deceived.
— Diana with the Lasso of Truth wrapped around her wrist.
Advertisement:

A relaunch of Wonder Woman for DC Rebirth, initially written by Greg Rucka with art by Liam Sharp and Nicola Scott.

In the wake of the death of the New 52 Superman, Diana is feeling strange. It is more than grief for her love, it is something else entirely: somehow, she is beginning to remember her past differently. In a fit of rage, she crushes the helmet of Ares... something which she should not be able to do. So she goes to Olympus to figure out what is going on and cannot find it, nor can she find Themyscira anymore.

So she decides that she must do something, that she must find the truth in the lies. And the first step to finding the truth and Themyscira... is to meet with the Cheetah.

This volume of Wonder Woman is divided into two parts: the modern stories ("The Lies" and "The Truth"), which run in every odd-numbered issue, and Diana's revised origins that take place in the past ("Year One" and "Godwatch"), which run in even-numbered issues. Liam Sharp illustrates "The Lies" and "The Truth", while Nicola Scott illustrates "Year One."

On April 12, 2017, both Greg Rucka and Liam Sharp announced they would be leaving the title after issue #25; Rucka cited the demand of the twice-monthly schedule and ongoing obligations to his creator-owned comics. The following day, DC Super Hero Girls writer Shea Fontana and DC Comics Bombshells artist Mirka Andolfo were announced as the new creative team... then, in June, solicitations listed James Robinson (Starman, Squadron Supreme, Cable) as the writer of the series, taking over after Fontana's arc. Robinson's run follows up on Geoff Johns' Darkseid War, which revealed that Diana has a brother she never knew about, one who'd play an important role in future events. Robinson's run begins with a story featuring the meeting between Diana and this brother, Jason.