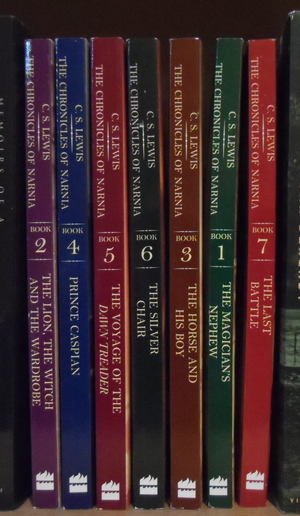 One step further than Back to Front, the story order and the chronological order are not directly related at all. Either the storyline jumps back and forth along the timeline, or portions of the story are re-told along a period of time already covered.

This is very popular in Lit Fic and certain types of art film, along with any character who is Unstuck in Time.

The simplest form of this — covering the same time frame from different perspectives — is equivalent to a "Rashomon"-Style plot. One way of doing this is to have a "present" storyline going on as the "past" occasionally pops up and mixes things around as a variation of How We Got Here, or a character spends time using a Whole Episode Flashback as a Framing Device. While they are related, there is still a dividing line as one of those storylines has still to be jumbled chronologically.

If the fact that a work uses anachronic order is a Reveal, you have a case of Sequencing Deception.

According to The Other Wiki, this is professionally known as "non-linear" style. Sometimes, this is also referred to as Quentinuity.

A sister trope to In Medias Res. Compare Real Time. Don't confuse it with Out of Order, which is where the proper order of the stories are shifted around because of a dodgy schedule.