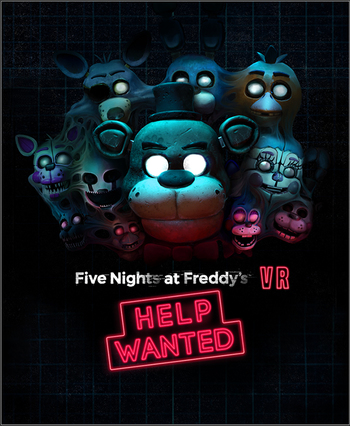 Are you ready for Freddy...in VR?
"Everything is working as intended."
— Fazbear Entertainment
Advertisement:

Congratulations, you've been selected to beta test The Freddy Fazbear Virtual Experience! While Fazbear Entertainment has had a rough couple of decades, in no small part due to the exaggerations (lies) about our company's past spread by a complete lunatic (lawsuit pending), we hope our new foray into the digital age will set the record straight. In this state of the art VR game, we've recreated scenes from the (heavily fictitious) Urban Legends about our company with the hope that we can finally move past these childish ghost stories and restore the public's trust in Freddy Fazbear's Pizza. But before that, it falls to testers like you to squash any stray bugs while enjoying harmless fun that cannot harm you at all in any harmful way.

As the name suggests, it is the first installment of the series to utilize Virtual Reality. Players assume the role of a repair person tasked with monitoring/repairing animatronic characters at a pizzeria; animatronics and locations are drawn from numerous past games from the series. The player is forced to complete various tasks involving the upkeep of the animatronics, who, as they usually do, repay the favor by attempting to murder them. The game was released on May 28th, 2019, though several of the more famous players have received beta copies before that date.

A Halloween-themed DLC, entitled "The Curse of Dreadbear", was released on October 23rd of the same year, with additional levels being released on the 29th.

Steel Wool released a "Flat" update on December 17th, 2019. This update enabled the game to be played without a VR headset. October 26th, 2020 saw the release of the game's mobile port, which cuts down many levels while adding a new one of its own.