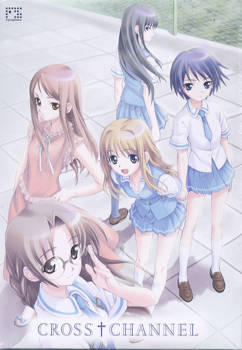 The characters, clockwise from the top: Youko, Kiri, Miki, Misato, Touko. Not shown: ability to function in society.

"This is the Gunjou Institute Broadcasting Club. Is anyone alive out there?"

Self proclaimed "Love Aristocrat" Taichi Kurosu attends a school called Gunjou Institute with his fellow members of the Broadcasting Club. Gunjou is a place for people who, based on an adaption exam, have an abnormally high adaptation coefficient. This means that the government has deemed them unlikely to be able to adapt into society. Taichi himself has an adaption coefficient of over 80, which is thought to be impossible.

After a slow falling out between members, Taichi attempts to bring the fractured Broadcasting Club back together by getting them to go on a camping trip together. This trip serves to only fracture the relationships between members even more, ending up a disaster. But as the members make their way back to town, they discover that every living thing has somehow disappeared from the world, leaving only them behind. Taichi tries to convince the others to help rebuild the broadcasting antenna so as to contact other survivors.

Strangely enough, the characters were the basis for the highly popular flash game NANACA†CRASH!!.