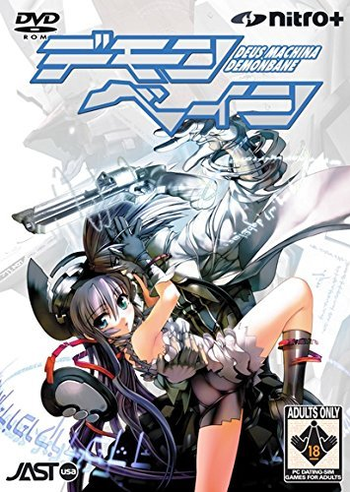 Kurou Daijuuji is a poor detective living in Arkham City (no, not that one). A center of both industry and eldritch lore, it is home to Miskatonic University (not that one either), which Kurou is a former student of. The city was built up and is run by an industry group and family dynasty known as the Hadou Financial Group, led by Ruri Hadou, who works to protect the city from the forces of darkness. Her main enemy is the villainous Black Lodge syndicate, led by the charismatic Master Therion. The white-haired Beast of the Antichrist, he is the most powerful sorcerer in the whole world, and his nihilistic outlook shapes the group's destructive goals.

One day, Kurou is asked by Ruri to search for a magical grimoire. As Kurou searches for the book, he unexpectedly runs into Al-Azif, a pretty girl who turns out to be the grimoire Kurou is searching for. While being chased by the Black Lodge, Al forges a contract with Kurou, bestowing him with powerful magic. Soon afterwards, Al also activates the Demonbane, a Deus Machina owned by the Hadou Financial Group, to combat the mechanical menace from the Black Lodge and Therion, who seeks the power of the grimore for himself. With this, the war between the Hadou Financial Group and the Black Lodge begins...

A series by nitro+ with Humongous Mecha and Cthulhu Mythos elements, it began as an Visual Novel eroge for the PC, then was ported to the Sony PlayStation 2 as a non-eroge remake. In full, the franchise consists of:

Tropes employed in this series are: