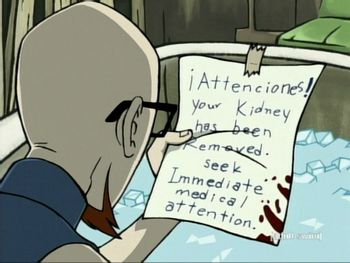 "Oh, for the love of— Not again!— Wait a minute... One... Two... Oh, this is serious."
"There was this crazy albino guy with a hook, and he lived in a mirror! And if you even look at him, you'd wake up a bathtub full of ice with your kidneys gone!"
— Donkey, Scared Shrekless
Advertisement:

Organ Theft, as the name would imply, is the practice of stealing people's organs via surgery, which can then be used for further purposes such as transplants or sold on the Black Market.note Yes, there's a black market for organs, because legitimate doctors (and, for that matter, lawyers) are way too Squicked out by the idea of selling organs to even consider doing it or allowing it to happen. Never mind that the demand for organs is shockingly high, and sadly, some people need money more than they need their organs. Which is why said black market exists in the first place. One particularly common variant of this trope is the "kidney theft"

Urban Legend, in which the victim is conned somehow and drugged into unconsciousness, and then wakes up kidney-less, crudely stitched up in a bathtub full of ice in a cheap motel, often with a message attached telling them to go to a hospital.

At first glance, it may seem plausible because if the wealthy, powerful Big Bad is on death's door and needs an organ tomorrow, they do have a motive to get that kidney by any means necessary and they have henchmen willing to kidnap a victim. But beyond that point, organ theft fails the logic test for a few reasons:

This trope was popularized by, and originated with, Larry Niven's Known Space, in which Organ Theft is called "organlegging", a portmanteau of "organ" and "bootlegging". (The Niven variant makes more sense, though, since in the stories, they do take everything useful and kill the donor during the procedure.)

Needless to say, this trope is a potent source of Nightmare Fuel, Rule of Scary and Fridge Logic (why not steal multiple organs and kill the victim instead of leaving a witness?). Sub-Trope of Human Resources. Super-Trope of Brain Theft.

Please take a moment to fill out your organ donor cards.

Welcome to the AIDS Club

A man tries to steal his date's kidney, only to find...well, watch.

Welcome to the AIDS Club

A man tries to steal his date's kidney, only to find...well, watch.