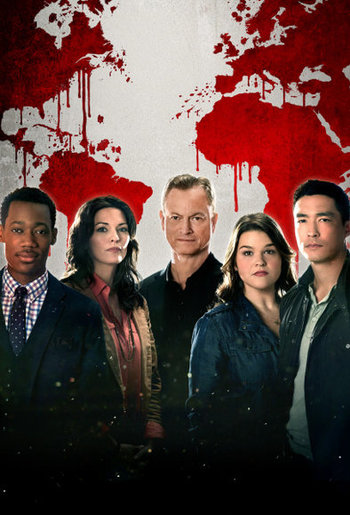 "When Americans get in trouble abroad, their passports won't save them. But we will."
— Jack Garrett
Advertisement:

Criminal Minds: Beyond Borders is the second Spin-Off of the popular Police Procedural Criminal Minds. The idea behind the show is rather simple: crime is a human constant, millions of Americans travel abroad every year, and just like they can be victims of serial killers, mass murderers, rapists, pedophiles, terrorists, abductors and gangsters at home, so can they while in a country where they might not speak the language, let alone know how to contact law enforcement.

Providing assistance in cases where the embassy's efforts aren't enough falls to the International Response Team, a fictional unit of the FBI (although the FBI takes part in investigations involving Americans abroad in reality) led by Jack Garrett (Gary Sinise), a 20-year career agent. Joining him are US Army veteran and skilled profiler Matt Simmons (Daniel Henney); kind-hearted technical analyst Russ "Monty" Montgomery (Tyler James Williams), who also liaises with the victims' families while the rest of the team is on a mission abroad; cultural anthropologist and polyglot Clara Seger (Alana de la Garza) and medical examiner Mae Jarvis (Annie Funke). Diplomatic liaison and international law expert Lily Lambert, who was played by Anna Gunn in the Backdoor Pilot, does not reprise her part as a member of the series' regular cast.

The first 13 episodes-long season began airing on March 16, 2016. Except the premiere, all episodes were aired Out of Order. The show was renewed for another 13 episode season, which began airing in March 2017. The show got cancelled

after two seasons due to low ratings but it's not all bad news as it's been confirmed that Daniel Henney will be moving to its parent show as a series regular, reprising his role as Matt Simmons for season 13

. Wryly lampshaded in the parent show proper when Emily Prentiss says in the season premiere, "IRT's loss is our gain."