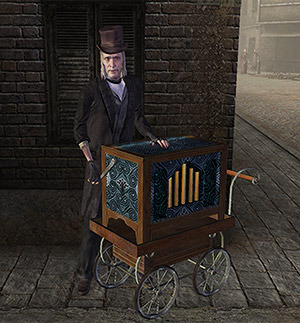 A specific type of Street Performer, the Organ Grinder is a Street Musician who would make a living turning the crank on a self-performing organ (sometimes mistakenly called a hurdy-gurdy), usually with a trained monkey on a leash dancing around—alternatively, the monkey is the one turning the organ, and the human is just there to hold the leash. The monkey will often be a capuchin monkey, as capuchin monkeys are often considered to be fairly easy to train and have been historically associated with organ grinders.

More or less a Dead Horse Trope these days, but expect them to pop up in stories set in the 19th and early 20th century. (They've actually been banned in quite a few cities, both because of complaints about the excessive noise they make and because of copyright violations by some of the musicians.)

See also One-Man Band. Not to be confused with Meatgrinder Surgery or anything of the sort.