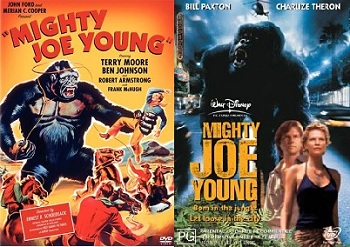 Mighty Joe Young is the name shared by a 1949 film and its 1998 remake. The original film combined live action and Stop Motion animation. The designs for the animation and effects are credited to Willis O'Brien, better known for King Kong (1933). In practice, much of the actual animation was completed by his protege Ray Harryhausen. This was the first major film work of the younger animator. The remake used animatronic models and puppets, with some CGI animation.

The film was produced by RKO Radio Pictures and directed by Ernest B. Schoedsack, who is best known for co-directing King Kong. The film starts somewhere in Africa. A little girl, Jill Young (Lora Lee Michel), asks her father to buy her a baby gorilla. He does so, against his better judgment. Jill names her new pet "Joe" and treats him like any other baby, feeding him milk from a bottle and singing him to sleep.

The scene shifts to twelve years later. Max O'Hara (Robert Armstrong), a theatrical impresario, is preparing to have a safari in Africa. He plans to collect animals to use for his next project, an exotic Hollywood nightclub. He is need of a decent animal handler. He hires Gregg Johnson (Ben Johnson), a rodeo roper. He is the first of several Cowboys hired by Max, who figures he could give a western theme to his nightclub. Weeks later, their expedition unknowingly enters the lands owned by the Young family. An enraged Joe is there to meet them and defend his territory. The baby has grown into an enormous ape. He is followed by a furious Jill (Terry Moore), now All Grown Up. Max manages to calm her down and later convinces her to join him in Hollywood. She and Joe are to become the headliners at his Golden Safari nightclub.

While the duo debuts to great success, Jill is disturbed that her "friend" has to be caged every night. She wants to resign, but Max convinces her to wait until a replacement act could be found. Weeks later, the duo are still waiting. Jill has a new reason to be reluctant to leave - she and Gregg have fallen for each other. At this point, a trio of drunken customers find amusement in performing animal abuse. An intoxicated Joe is sufficiently enraged to go on a rampage. While it doesn't last long, the authorities mark Joe as dangerous and sentence him to death. Jill, Gregg and Max have to co-operate to rescue him.

The film was a commercial flop, one of several that plagued RKO under the administration of Howard Hughes (term 1948-1955). There were plans for a sequel, but these were terminated early. However, the effects were impressive for the time and the film gained an Academy Award for Special Effects. While essentially a tamer and more humorous take on King Kong, the film would later find its audience on television. For decades, it was broadcast alone or with other "giant ape" films, gaining a reputation as a classic.

The film was co-produced by RKO Pictures (a corporate successor which mostly handles old properties) and Walt Disney Pictures. The director was Ron Underwood, better known for Tremors (1990) and City Slickers (1991). The film established a new back story for Joe and Jill. As a little girl, Jill Young (Charlize Theron) witnessed the death of her mother (a zoologist) and a female gorilla at the hands of Evil Poachers. Their leader Andrei Strasser (Rade Serbedzija) loses two fingers in the process and has to retreat to get medical help. Joe, the orphaned baby gorilla, is left in the care of Jill.

In the present day, Joe has grown into an enormous gorilla and Jill is worried about his status as a target for more poachers. She is contacted by Gregory "Gregg" O'Hara (Bill Paxton), a wildlife refuge director, who convinces her to move to the United States with Joe. Joe is a great favorite with the staff of the reserve and even attracts the attention of the press. This alerts Strasser to the current whereabouts of the gorilla. He has spent all these years blaming the creature for crippling him. He now wants revenge.

Strasser poses as an enviromentalist who is interested in returning Joe back to Africa. He has a henchman of his use a noisemaker to have Joe go on a rampage. In the process, Joe recognizes Strasser and attacks him. For attacking a human, the authorities condemn Joe to death. Jill wants to smuggle him out of the country and assigns Strasser with the mission. She realizes too late who Strasser actually is. Joe and Jill have to fight their way out of Strasser's hands while Gregg searches for them-partially out for their safety, partially out of falling for Jill.

This film was a box office bomb. It earned an estimated 50,632,037 dollars in the United States market and underperformed elsewhere, failing to even cover its budget. It settled at only the 44th most successful film of its year, though it eventually sold well on home video. It was nominated for an Academy Award for Best Visual Effects, but lost to What Dreams May Come. While some critics praised the added depth to the characters and the special effects, most complained about the rather melodramatic poacher storyline.