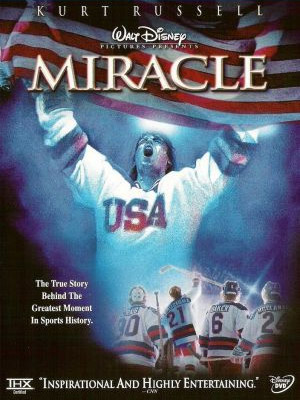 11 seconds, you've got 10 seconds, the countdown going on right now! Morrow, up to Silk. Five seconds left in the game. Do you believe in miracles? YES!
— Al Michaels
Advertisement:

Miracle is a 2004 film starring Kurt Russell based on the true story of 1980 US Ice Hockey team and the "Miracle On Ice" at the 1980 Winter Olympics.

In 1979, the United States is in turmoil, knee-deep in the Cold War and international conflict, escalating in the U.S. eventually boycotting the 1980 Summer Olympics in Moscow as a response to the Soviet Invasion of Afghanistan. While the Winter Olympics had no such problem for the U.S., as it was to be held in Lake Placid, New York, Americans were still uneasy at the idea of the Soviet team, winners of the last four Olympic hockey gold medals dating back to 1964, coming to American turf and kicking everyone's ass.

Enter Herb Brooks (Russell), decorated head coach of the University of Minnesota's powerhouse hockey team and a former player who was the last man cut for the 1960 U.S. Olympic team that won gold that year. Assembling a roster of collegiate players, his job over the next year is to shape them into a team capable of taking down the Soviets, learning how to play with and for one another and for their country. Both the U.S. and Soviet teams emerge from the Olympic group stage to face each other on February 22, 1980, with the right to play for the gold medal hanging in the balance. What looked like the biggest David vs. Goliath matchup on paper turned into arguably the greatest upset in American sports history, capped at the final buzzer with announcer Al Michaels famously asking the viewer if they believed in miracles, hence the title.

Miracle was another evolution of sports movies for Disney. After a wave of kid-aimed slapstick sports comedies in the 90's, Disney scored a commercial smash in 2000 with Remember the Titans, a football movie that, while still aimed at families, was an outright drama, although Very Loosely Based on a True Story. Miracle goes a step further into a full-on Docudrama, staying close to historical accuracy whenever possible, avoiding a Broad Strokes approach, and, unlike nearly every Disney-branded film at that point, was a drama aimed at older audiences (for instance, there are no major speaking parts for children). Disney replicated Miracle's docudrama format several more times, with The Greatest Game Ever Playednote about 1913 U.S. Open amateur champion Francis Ouimet, Invinciblenote about bartender-turned-walk-on-Philadelphia-Eagle Vince Papale, and Glory Roadnote about the 1966 Texas Western College basketball team, who was the first team to win the NCAA Championship with an all-black lineup. Miracle was directed by Gavin O'Connor, who would direct two more critically acclaimed sports movies with Warrior (mixed martial arts) and The Way Back (high school basketball).