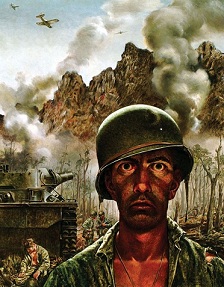 He's not staring right at you, he's staring right through you. note This famous painting by Tom Lea, originally titled The 2,000 Yard Stare, is set at the Battle of Peleliu - one of the bloodiest of the US's battles in the Asia-Pacific Theatre.
"This is where Cameron's soul snaps like a Twix bar."
— Doctor Insano reviewing

The lights are on, but nobody's home.

A character who has just gone through some sort of trauma, learned something they probably didn't need to know, or seen something they really shouldn't have had to, will often have an unfocused, vacant stare into a vast abyss of nothingness, slipping into a shock and weariness from which it is very hard to escape.

Note that this trope describes the stare/facial expression itself, and not what causes it or anything related.

is believed to have originated in World War I, and was coined for the faces of battle-weary soldiers. It was popularized in World War II and named for the perception that such stares really do seem to be able to see very far ahead. Eyes cross a little when focusing on something reasonably close, but eyes not looking at anything will behave like eyes looking at something very far away. Dull Eyes of Unhappiness can look similar to this, but they're chronic while this trope tends to be transitory.

See also Heroic BSoD, for what usually goes hand-in-hand with this. A character who exhibits this may be on their way to developing posttraumatic stress disorder

and thus may develop into a Shell-Shocked Veteran. Such a veteran though may show it as well, particularly if it's something which helps them feel comfortable and cope after their duty is done.

Compare Empty Eyes and Blank Stare. Not related to the "Thousand Yard Stare of Impending Flashbacks", an affliction near universally shared by the characters of Lost.

Very much Truth in Television, and common in PTSD (Post-Traumatic Stress Disorder) patients.