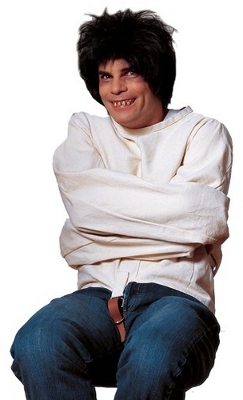 They're coming to take me away, haha!

"We psychoanalysts never use the crude term 'crazy'. You may merely suffer from Type 3 Psychomanic Derangement, which presents as craziness."
— Dr. Klaus Angstrom, Broodhollow
Advertisement:

Any tropes involving madness or insanity. Except those dealing with Hollywood Psych.

These can run the gamut from the weird but generally happy chaos that inhabits the Cloudcuckoolander's mind to the darkest corners of a person's shattered psyche.

Please sort tropes appropriately. Some tropes may fit in both the "Characters" index and the "Madnesses" index, but each trope should only belong in one section of each index.

Causes
Tropes about the origins and instigations of mental disorder.
Conditions
Issues, crises, things that are running through the sufferer's head.
Symptoms
Ways to show the audience that a character is not of sound mind.
Remedies & Resolutions
Settings
Other
What did we tell you? We said this place would ruin your life.