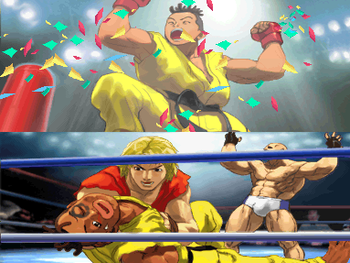 He always thought himself to be on the top of the world.
Advertisement:

If you're struggling to do something, nothing can give you more satisfaction than success. That's why thinking you've succeeded at something when you really haven't can be really annoying or even downright torturous. Considering that, you have to wonder why the minds of people, both real and fictional, insist on forcing them to experience visions of such things as having dead relatives come back to life, marrying lost loves, escaping life-threatening situations, becoming rich/famous and even just getting out of bed when we're tired in the morning, even though they all have to inevitably end with the rug being pulled out from under you. Basically, if you don't know the meaning of "I can take the despair, it's the hope I can't stand," this clearly has never happened to you.

Often in fictional works, the audience is led to believe along with the character that the hallucination/dream is real. We learn it wasn't real only in usually very creepy and ominous reveals, a reveal that usually involves somebody saying something like, "But you never really got out!!!"