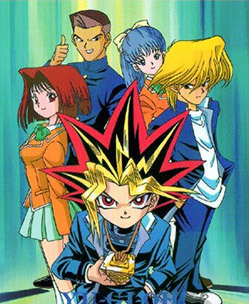 Toei's version of the King of Games and his True Companions!
Advertisement:

The first Yu-Gi-Oh! anime series (also misleadingly nicknamed Season 0) was a 27-episode adaptation of the manga series by Kazuki Takahashi, produced by Toei Animation in 1998.

Based on the first seven volumes of the manga, Toei's series loosely covers the events of Yugi completing the Millennium Puzzle up to the Monster World RPG arc. However, this series skips many chapters of the manga in favor of original scenarios and features a one-shot character from the manga, Miho Nosaka, as a main character. Many chapters were reworked to fit the length of an entire episode, and a number of the original games were either imported or replaced. It also borrows plot elements that aren't introduced until the Duelist Kingdom arc, such as the early introduction of Shizuka, Jonouchi's sister.

Owing to its obscurity, the series was overshadowed by the second anime adaptation, known as Yu-Gi-Oh! Duel Monsters in Japan, and its English localization by 4Kids Entertainment. As that anime series was done by a different studio and re-imagined some of the manga chapters that this anime also covered, Toei's anime series was never exported outside of Japan.

Some of Toei's manga-to-anime alterations were carried over by Studio Gallop when producing the second series, such as calling the "Magic & Wizards" card game "Duel Monsters", and having Yami Yugi grow taller when he transforms. This series' incarnation of Seto Kaiba also inspired the Big Bad from the "Virtual World" filler arc, Noah Kaiba, whose outfit and green hair was a Shout-Out to this Kaiba's neon green hair and his outfit from the "Death-T" arc.

Toei's anime spawned a 30-minute movie, a few video games and a card game by Bandai (the latter of which would be replaced as well by Konami's card game).