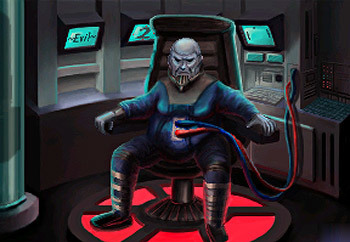 An event has left a villain severely injured or drained of power. So, their minions hook them up to a device that will keep them alive for the time being. It doesn't have to be a machine; it can be the inability to survive without attaching to another body.

This can be a way of creating sympathy for the villain by showing that they are weak or dependent. The weakness can be exploited by someone attacking them — the Evil Overlord may not have full strength because of what's happened to them or may be stuck in one place. Dependence means that The Hero can destroy the support system to destroy their enemy (although there might be moral issues with dealing the killing blow to a villain who can't fight back). Frequently, the very thing that made the Dark Lord this way was done by the hero, sometimes in a battle that didn't succeed in completely killing the villain. This can be a sign that the hero wasn't ready to fight the villain, that they did so rashly, etc.

Please note that it is possible for said Dark Lord to recover from this, maybe even come back stronger than ever.

Aesthetically, this trope associates the villain with illness and death, which in turn makes them seem creepier than he would be otherwise.

Usually a subtrope of Man in the Machine. This may result in a Dragon-in-Chief and/or The Heavy. May or may not be an Evil Cripple. Can also be a good reason to employ Orcus on His Throne and may be a Greater-Scope Villain. See also Red Right Hand, Brain in a Jar, Cybernetics Eat Your Soul, and No Immortal Inertia. May also be a trait of a villainous Symbiote. Compare and contrast We Can Rebuild Him for when this makes a villain stronger, not weaker. For when the dark lord creates themself a new body to replace their old one, see Self-Constructed Being. See also Strong Empire, Shriveled Emperor, which this can be a particularly extreme version of when the Dark Lord on Life Support also happens to rule a powerful force. Compare Sealed Evil in a Can, when the above-mentioned defeat completely incapacitated him, but there's still a danger they could come back from it.