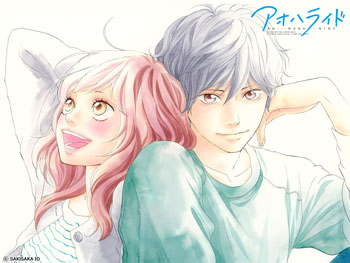 The scent of air after the rain... I heard your pulse. I saw the light.note From left to right: Futaba and Kou
Advertisement:

Ao Haru Ride, (shortened to AoHaRide in the original Japanese release; officially translated as Blue Spring Ride in some countries), is a shoujo manga by Io Sakisaka that was serialized in the magazine Bessatsu Margaret from 2011 to 2015, following the success of her previous work Strobe Edge. It was compiled in twelve volumes along with five Light Novel adaptations. Both an Anime and a Live-Action Adaptation were announced and premiered in 2014, with Production I.G producing the anime for the Summer 2014 Anime season (with two Original Video Animation episodes) and the live-action Film premiering in December 2014. The anime is available on Crunchyroll

The story follows Futaba Yoshioka, previously a quiet and gentle girl who has changed her image to become approachable and confident, after her insecurity accidentally drove away her First Love Kou Tanaka and her popularity with the boys caused her friends to leave her. Despite her newfound persona, she is anything but happy, and she only realizes this when Kou re-enters her life, now under the name Kou Mabuchi. In the two years they haven't seen each other, Futaba is shocked to realize that Kou has changed so much. Despite what they felt for each other in the past, Kou informs her that they can no longer be what they used to be. However, Futaba's love for him reawakens and she is determined to unlock his past and heal his heart.

Joining the whirlwind of adolescence are Yuuri Makita, an unpopular but gentle Kawaiiko; Shuuko Murao, a lone Sugar-and-Ice Girl with an attachment to Youichi Tanaka, a young teacher and Kou's estranged older brother; and Aya Kominato, an outgoing boy with his heart set on Shuuko and a rivalry set on Tanaka-sensei.