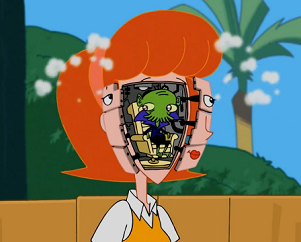 What's small to us is big to them!
Advertisement:

In sci-fi and anime you have your Humongous Mecha and you have... this.

The Mobile-Suit Human is a Mini-Mecha designed to look like everybody else (more or less), manned by a tiny (usually about rodent-sized) pilot who can operate it to blend in with the rest of the population without being noticed; or to make himself seem more impressive than he otherwise would be. Nobody is ever afraid of anything tiny if it's not a Killer Rabbit.

Most often employed for comedic purposes, the pilot of the suit is usually revealed at one point or another, to the astonishment and shock or amusement of who or whatever is unfortunate enough to be the one to open it up or see inside it.

The trope name is a pun on Mobile Suit Gundam.

A potential subtrope of the Monster Suit and Human Disguise. Such pilots typically live in a Mouse World. For stories that depict ordinary humans as metaphorically controlled by tiny pilots, see Ghost in the Machine. See Brain with a Manual Control for when an actual human can be controlled like a robot from the inside of their body. For humans who are in mobile life support robots, see Man in the Machine. See Little Green Man in a Can for different levels of alien and/or mecha.

For a more specific form of this trope, look to Totem Pole Trench.

The left-facing man is revealed to be a robot operated by green blob creatures.

The left-facing man is revealed to be a robot operated by green blob creatures.