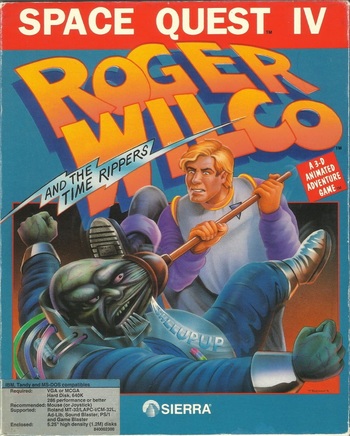 Once you go meta, there's nothing betta.
Space Quest IV: Roger Wilco and the Time Rippers (also simply known as Space Quest IV) is the fourth game in the Space Quest series, released in 1991. It is also the first game in the series to use VGA graphics. Sludge Vohaul sends henchmen time travelling from Space Quest XII to assassinate Roger Wilco in the current time, forcing Roger to hop across future and past games to stop Vohaul's plan, all while making sure he doesn't cause his own existence to be erased.
Advertisement:

This would be the last game designed by both Mark Crowe and Scott Murphy, as Crowe would be relocated to Sierra's sister company Dynamix shortly after the game's release.

"It looks like shoplifting is taken seriously around here!"

"It looks like shoplifting is taken seriously around here!"