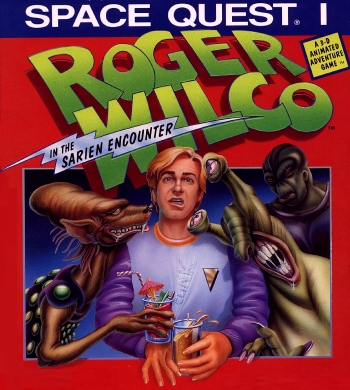 Not all aliens are green skinned space babes.
"You serve as a member of the crew of the Arcada as a janitor."
"That's right, a janitor. And not a very good one."
— Opening Scroll from Space Quest I: The Sarien Encounter
Advertisement:

Space Quest is a series of six sci-fi themed adventure games made by Mark Crowe and Scott Murphy (collectively, the "Two Guys from Andromeda"). Published by Sierra in the late 1980s and early-to-mid 1990s, the protagonist is not a grizzled Space Marine or brilliant scientist but one Roger Wilco — a space janitor. And not even a particularly almighty one.

Stronger than a Betelgeusian Puddle Monster, faster than a Xenon Space Weevil, and better with a mop than a blaster, the unwilling Roger finds it his fate, time and again, to save the galaxy.

His arch-nemesis — Sludge Vohaul, a grotesque parody of an alien mastermind, who first encounters Roger face-to-face in the second game as Vohaul monologues about his plan to flood Roger's home planet of Xenon with an army of pushy insurance salesmen.

The games extensively parody most of modern science fiction, and Star Trek in particular.

Individual Games: (Kindly add tropes exclusive to these works only to their pages)

In addition to the official six games, there are several fan-made games and a graphical update to the second title on the level of the official update to the first. There had been talks of a Space Quest VII but as of now it looks like there will be no more official installments in the series. However, the Two Guys eventually reunited

and are looking to make a new "SpaceVenture"

Astro Chicken is a Game Within a Game that appears in several Space Quest installments. The gameplay involves trying to get a falling chicken on a trampoline. You can make the chicken fly left or right, but doing so cost you feed. Running out feed causes the chicken to be unable to fly.

This game within a game has examples of: