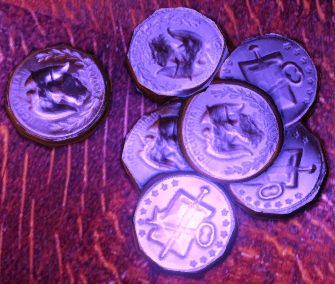 Money is an important part of daily life, and fiction is no different. And fictional settings often use fictional currency.

Inventing a fictional currency helps establish a setting as unique, and when done well it builds immersion. Of course, when done poorly, it can have the opposite effect — having an unexpected or unexplained reference to a made-up word that means "money" can be confusing or distracting. Often, a fictional currency will be roughly equivalent in value to a real-life one; this saves the writer the effort of having to do conversion rates mentally. The most common targets for this treatment tend to be the dollar or the yen. This is occasionally explicit, as with the double dollar or the nuyen. The zeni (or zenny) is a popular name for fictional currencies in Japanese media.note It comes from the word for "money" or "coin".

Occasionally, the name of a recherché and/or archaic real-world currency will be borrowed: e.g. the Cardassian lek (Albania), the Centauri ducat (Republic of Venice and elsewhere), or the guilders in Andromeda (pre-Euro Netherlands). "Crowns" is also a common name, which exist in real life as the currency in the Scandinavian countries, Iceland and Czechia (which get the name from having one or more crowns engraved on one side).

Compare Call a Rabbit a "Smeerp", though Justified in that one generally expects there to be different names for different currencies; thus, the ones that borrow the name of a real-world currency fall under Call a Smeerp a "Rabbit". Contrast Gold–Silver–Copper Standard, where the money used isn't a currency at all, but precious metals are used instead; the two may overlap when different names are given to the appropriate coins. Compare and contrast with Energy Economy, where energy, either a real form or fictional, is used for currency. Examples are often a Global Currency. We Will Spend Credits in the Future is a Science Fiction-specific subtrope. See also Weird Currency and Practical Currency.