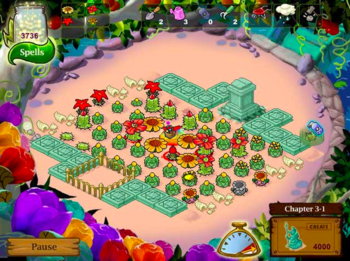 All in a day's work.
Advertisement:

Plantasia is a 2006 Time Management Game / Simulation Game for Windows developed by Gamelab and PlayFirst.

You play as Holly, a fairy who has to grant a wish before she can become a full fairy. The wish she has to grant is for a man named Jack, who wants all the gardens around his estate to be fixed. Grow and care for the flowers while protecting them from pests and weeds, and use the mana harvested from them to repair the garden statues.

See also Diner Dash for a similar game made by the same developers.