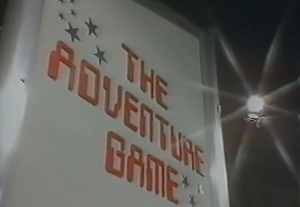 "Many light years away, on the far side of the galaxy, in a region often visited by time travellers, lies Arg, a small planet of little consequence. Naturally, the inhabitants of Arg get a bit fed up with trippers and tend to discourage them. Often they will even nick the essential crystal off their time machines and hide it. Visitors from planet Earth inquiring after their crystal can nevertheless feel quite at home here, because the Argonds are a polite race and careful to adapt their shape so as not to frighten strangers. Unfortunately, they also have a regrettable sense of humour..."
—Opening narration from Series 1
Advertisement:

The Adventure Game was a Game Show (crossed with light entertainment) created by Patrick Dowling that aired for four series from 1980-86 on BBC1 (Series 1) and BBC2 (Series 2-4). Dowling co-wrote and co-produced the first two series with Ian Oliver, who took over both jobs after Dowling retired from the BBC in 1982.

Although the execution of the game changed with each series, the premise was always the same: three contestants, including two celebrities and a member of the general public, would travel across time and space to the distant planet of Arg, whose residents, the Argonds, would then set them a number of challenges to complete before they would give them the time crystal they needed to return home. (Dowling envisioned the series as a combat-free, live-action version of Dungeons & Dragons, with the Argonds as the game masters.) The episodes would then cut back and forth between footage of the contestants trying to solve the puzzles and occasional sketches involving the Argonds. Each series featured multiple puzzles that involved home computers, technology that was still strange and new to viewers and contestants alike.

But in every episode except one,note  Episode 4 of Series 1, in which they ran out of studio time and had to cut the episode short. there was a sting in the tail: once they had retrieved the time crystal, the contestants would have one final challenge, and failure meant being evaporated and returning home on foot instead of by the spaceship in which they arrived. In Series 1, this meant navigating a floor covered with tiles of different shapes and colours, where they could only step on tiles with a specific colour or shape; they had to navigate the same floor at the beginning of the episode, so the challenge was to recognise which tiles were safe and remember this when returning. In Series 2, this was replaced with the series' best-remembered challenge: the Vortex, in which the contestants had to navigate an isometric grid one at a time while the Argonds moved the Vortex around the grid. If the contestant stepped onto the space occupied by the Vortex, they were evaporated.

The second most well-remembered game was the Drogna Game, based on the Argond currency. Starting in Series 2, the tile layouts the contestants had to navigate featured five colours - red, orange, yellow, green, blue - and five shapes - circle, pointed oval or crescent, triangle, square, pentagon. These colours and shapes also appeared on plastic discs that were used by the Argonds as money, with the value being the product of the number of sides on the shape (one for the circle, two for the pointed oval/crescent, etc.) and the position of the colour in a list of colours of the spectrum (so that a red circle was worth 1 drogna, while a blue pentagon was worth 25). Sometimes they would have to base their crossing of the grid on sticking to the higher values, while other times they would have to move in cycles based on the colours or shapes.

The Argonds' default form was dragonlike (hence the many Significant Anagrams of "dragon" sprinkled throughout the show), but several of them adopted human forms so as to make it easier to explain the puzzles for the benefit of the viewers before the contestants saw them, and then communicate with the contestants themselves. The only one to appear in all four series was Gandor (Christopher Leaver), an elderly and eccentric butler. In the first three series, he was assisted by Gnoard (Charmian Gradwell); she was replaced for the final series by Dorgan (Sarah Lam). The first series also featured Darong (Moira Stuart, before she became a newsreader), while the last two series featured The Adventure Game's best-remembered character, the backwards-talking Australian Ron Gad (Bill Homewood), whose Catchphrase was an encouraging "Doogy rev!" ("Very good!") for the contestants. The Argonds' monarch was the Rangdo of Arg, whom the other Argonds addressed as "Uncle" but whom the Earth contestants were required to greet by bowing and saying "Gronda, gronda, Your Highness." In the first series, he was played by Just a Minute creator Ian Messiter, but in Series 2 and 3 he took the form of a potted aspidistra, and in Series 4 he appeared as a giant teapot.note  The column on which the aspidistra pot rested was controlled from within by Kenny Baker, more famous for controlling Star Wars' R2-D2.

The series was aimed at children and aired around teatime, but developed a considerable adult following due to the entertainment value of seeing sitcom actors and children's TV show hosts floundering in their attempts to decipher Ron Gad's backwards speech or to get the key to a door out of a seemingly impenetrable vessel. Each series was re-run a few months after its original airing, but then they were condemned to the archives (or, worse, wiped) apart from an occasional airing of Series 4 on Challenge TV in the early 2000s... until 2016, when the BBC Store made seven surviving episodes from Series 1 and 2 available for purchase,note  Though only in the UK. with a DVD release of the surviving episodes from all four series following in 2017.

This series featured examples of: