Video Game / The Ditty of Carmeana 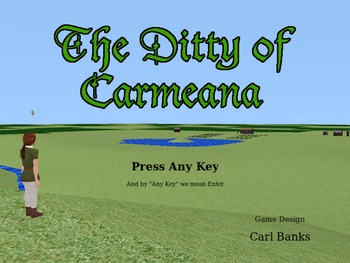 The Ditty of Carmeana is a parody of action-adventure and other video games, especially The Legend of Zelda. It spoofs many of the clichés and weird situations that occur in video games. Although currently just a demo, it got some attention after Vinny from Vine Sauce streamed a playthrough of it.

. A playable demo from 2014 can be downloaded here

Note: The gamer is asked to type in the Hero's name, but regardless of how it's spelled, it's pronounced "Lance". We will just spell it "Lance" in the trope listings.

Warning: Spoilers not marked in the trope listing. Read at your own risk.

The Ditty of Carmeana provides examples of: