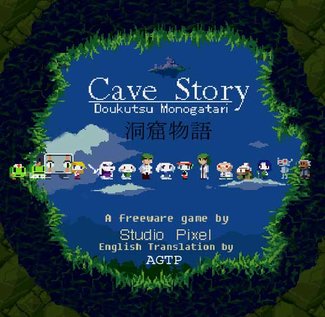 Cave Story is a jumping-and-shooting action game.
Explore the caves until you reach the ending.
You can also save your game and continue from where you left off.
— Author's description of the game
Advertisement:

You wake up in a cave. You shoot your way out of the cave, so you can get to a village in another cave. Then you have to go to a different cave, followed by...

Well, it's aptly named. You might just come for the fun, Mega Man-style gameplay, but the story is what you will end up staying for.

Cave Story is a freeware Metroidvania game by Daisuke Amaya, aka Studio Pixel. The game thrusts you into the action with no explanations, forcing you to figure out the plot by yourself as you go. You play as Quote, a mysterious young man who finds his way to a village of bunny-like people called Mimiga, who are housing a team of scientists that came to study the caves. Meeting up with fellow humanoid Curly Brace and a selection of other characters, Quote must save the Mimingas and scientists from The Doctor, a rogue Mad Scientist who seized the magic helmet known as the Demon Crown and is trying to raise an army of robot soldiers and zombified Mimingas to Take Over the World.

This game was created entirely by one man in his spare time. Daisuke Amaya wrote the scenario, drew the artwork and scenery, animated the sprites, designed all of the levels, composed all of the music, and programmed the entire game engine, all by himself over the course of five years.note  Actually, that's lowballing it. While fullscale development of the game lasted five years, Cave Story started being made five more years prior. Daisuke made a game in five years and had people playtest it. When they were unsatified with his work, he took what he had and refined it over the course of the five years that most people know the game for. Let that sink in; Daisuke spent ten years of his life, a full decade creating this game, and released it for free. Truly, this man is a saint.

Its breeding ground on the English-speaking Internet is here

. While the source code for the game was never officially released, it's extremely easy to reverse engineer and disassemble. That, as well as its freeware nature, has led the game to become the 2D platformer equivalent to Doom in terms of sheer ubiquity - ports are available for Mac, Linux, PSP, Xbox, Amiga, Mega-Drive/Genesis, and much, much more. Multiple source ports note NXEngine, NXEngine-evo, and CSE2 also exist, pushing said ubiquity even further.

The game has also seen quite a few commercial re-releases over the years - First on WiiWare, which added an updated graphics option, dubiously remastered music, multiple difficulty levels, the ability to play as Curly Brace, and a Boss Rush mode. This version was then brought to DSiWare, Steam, the 3DS eShop, and Nintendo Switch, with each version stacking on extra modes, levels, soundtracks, and tweaks along the way - the Nintendo Switch version in particular adds full widescreen support and Co-Op Multiplayer. There's also a Video Game Remake for Nintendo 3DS (in addition to the standard port that's on the eShop) entitled Cave Story 3D. It's (unsurprisingly) been given a 2½D overhaul, but otherwise is identical.

In December 2021 (and ONLY for the holidays), Nicalis, without any input from Pixel, released a Christmas Episode spin-off Stealth-Based Game entitled Cave Story's Secret Santa.

Pixel has gone on to create Kero Blaster, which can be seen as a Spiritual Successor.

open/close all folders
Tropes # to C
Tropes D to F
Tropes G to J
Tropes K to O
Tropes P to T
Tropes U to Z
You have died. Retry?
Feedback

The aptly named "First Cave" is the first area that the player will have to explore in Cave Story. It's a short and simple stage, but it can still teach new players a lot about the game mechanics, including jump and water physics, enemies' behavior and environmental hazards like the red spikes.

The aptly named "First Cave" is the first area that the player will have to explore in Cave Story. It's a short and simple stage, but it can still teach new players a lot about the game mechanics, including jump and water physics, enemies' behavior and environmental hazards like the red spikes.