Locked Out of the Fight 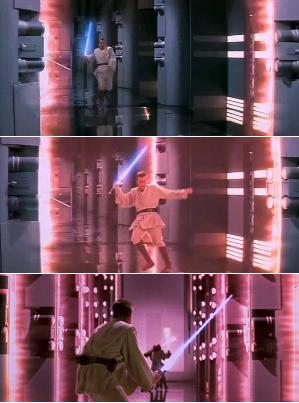 Why didn't he just cut through the generators?note And what the hell are these alternating laser gates even for anyway?
"Meyer's big pal was Benny Siegel. Benny loved a good fight. Even a bad fight. But they wouldn’t let him in on this one."
— Lucky Luciano, Mobsters
Advertisement:

This is when characters are accompanied by some allies, but the plot requires that they are somehow forced to fight without those allies. This is typically done by somehow physically preventing the allies from doing anything.

There are lots of methods for achieving this. A door which the hero walks through could suddenly slam shut and lock itself before the allies can follow, leaving the hero alone. The roof can collapse, with the hero being the only one who ends up on the dangerous side of the rubble. The hero can nobly tell the allies to swing across a deep ravine first, only to have the rope break before the hero gets a turn, just as the pursuing villain shows up. Everybody could be caught in an explosion, with only the hero and the villain remaining conscious. It's frequently some sort of Plot-Driven Breakdown. Or whatever - the point is that although the hero brought help, a Contrived Coincidence has removed that help from the fight. The allies may be able to see the fight, and may be able to shout encouragement, and may even be able to do small things that assist the protagonist, but they're unable to actually take part directly.

This is done when writers want their main character to be accompanied through the plot by some friends and allies, but also want their main character to fight a bad guy one-on-one, without being helped. For one thing, it increases the sense of danger, especially if the method of incapacitating the allies leaves them in trouble if the protagonist loses. It also allows a protagonist to demonstrate toughness and skill more effectively than if it's a team effort — defeating the villain can seem a bit less heroic if you gang up on him in a six-to-one fight. And sometimes, it's just thematically or narratively appropriate that the protagonist defeats the villain alone. Locking characters out of the fight is an option which allows this.

There are several related tropes which can be used instead of this one. Instead of a using contrived coincidence, you can make it deliberate by saying that This Is Something He's Got to Do Himself, having the villain order his mooks to Leave Him to Me!, or having everybody agree to Combat by Champion. Or instead of locking the support staff out of the fight, make them just plain useless in it or establish a reason why the hero is the only one capable of victory. And of course, if there's an extremely powerful supporting character who needs to be kept well away, you may be forced to kick them out of the story for a while, which may or may not take the form of an extended invocation of this trope. You can also avoid the issue altogether by having the character deliberately not bring allies at all, because I Work Alone.

In Video Games, this may be combined with a Duel Boss.

Sub-trope of Involuntary Group Split. See also In the End, You Are on Your Own, Deus Exit Machina, and Rear Window Witness.